We have known for about two months now that Vera would need an operation. We have been anticipating this with mixed feelings of looking forward to it and dreading it at the same time.
We were looking forward to it because the operation would solve and prevent issues. And when we knew it had to happen, we just wanted to get it over with as soon as possible. Preferably at a time when Vera was doing well, so she would withstand the operation better.
We were dreading it because it is not a nice experience for Vera and for us it means chaotic and tiring times ahead. This week it was go time. We received a phone call on Tuesday and were asked if we could report to the hospital at 8:00 AM the next day; the only time slot available where all physicians involved would be present at the same time. It wasn’t even that bad to know with such short notice. Thankfully, grandpa and grandma de Zwarte were able to watch Mieke, things could be arranged at work (like always, fantastic employer!), bags were packed and we were ready to go.
Three specialists were needed in the OR. First, a port (portacath) was placed, second, the throat-nose and ear doctor placed ear tubes in Vera’s ears and last, the dermatologist removed a wart from her cheek. The ear tubes are needed because Vera has a narrow ear canal and has had several bad ear infections, which led to sleepless nights because of pain lying down. The ear tubes will prevent future ear infections.

The port requires some explanation: 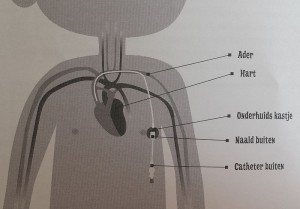 a port (portacath) is the main form of a central venous access device. The term: totally implantable venous access system (TIVAS) is also used. ‘Port-a-cath’ is a brand name. A port (or portacath) is a small medical appliance that is installed beneath the skin, in Vera’s case on the side of her chest right under her left arm. A catheter connects the port to a vein. Under the skin, the port has a septum through which drugs can be injected and blood samples can be drawn many times. 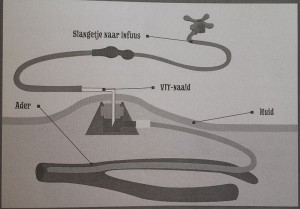 The reason Vera needs this is because Vera’s veins are very hard to find and starting an IV-line has been very troublesome. During her last day treatment for her porous bones, Vera ended up needing general anesthesia to get an IV-line in (see this blog post). General anesthesia is not desirable because it is not without danger for Vera because she has a narrow trachea. Every time Vera needs treatment and a vein cannot be found quickly, it is risky. With the port this risk is taken away, there is always direct access. And since Vera needs an IV-treatment for her bones (with so called bisphosphonates) several times a year, it is a good thing that the port was placed. So, it was an unpleasant procedure once to make it possible to give her medication through an IV or even take blood more easily and repeatedly in the future in a much more comfortable way. In the future, when treatments are no longer necessary the port can be removed.

Daddy takes Vera to the OR

The operation went well. Although sad to see that the doctors had ‘poked’ Vera everywhere to find an IV-line for the general anesthesia: little holes in both hands, feet and on her head were visible. Another confirmation that placing the port was very necessary.
In the OR the doctors noticed how irregular Vera’s heartbeat is, a known issue for our pediatric cardiologist, but to a doctor who sees this for the first time it can be quite unnerving. Her blood pressure also dropped at one time, which is not usual for her. During recovery the anesthesiologist wanted to keep her a little bit longer in the recovery room to monitor this and to adjust her medication accordingly. It is known that children with Costello Syndrome react differently to pain medication and experience pain faster, so more is needed. Several hours later we were out of recovery. Vera’s breathing was quite noisy which was worrisome to us and the doctors. They were the same noises that landed her in Intensive Care several times due to breathing problems. At the same time, it wasn’t so bad when she was calm. We had a very good consultation with the pediatrician where our experiences with Vera were taken seriously in consideration. Because Vera has responded well in the past to the anti-inflammatory drug Dexamethasone and we figured she could have an inflamed trachea due to intubation for the anesthesia, it was decided to give her this medication. In the meantime, the ICU was notified just in case, which made us nervous.

But soon Vera responded very well to the medication. And ended up sleeping better than ever that night (with me next to her, see photo of our nice room). And, like so often with Costello-children, the next day she had improved tremendously. A true miracle and big difference with the day before.

Because we heard Vera’s normal breathing sounds again the next day, we consulted about taking her off the Dexamethasone again. They agreed, took her off and things went well. Vera started babbling again. When we were moved to a different ward with other children Vera was highly interested in the other babies.
At the end of the day we were released with some instructions on how to care for her further at home. Because, when it’s medically possible, home is where you recover best.
When Vera realized we were going home she started signing (thanks to the children’s sign language DVD’s from ‘Lotte en Max’) enthusiastically. She signed the signs for: ‘go outside’, ‘car’ and ‘home’ with a twinkle in her eye and her familiar ‘yyyyyes!’
And so we did. Go outside, into the car and home. Yes!

In our eyes, the type of care at Wilhelmina Kinderziekenhuis (WKZ) (Wilhelmina children’s hospital) is fantastic. The fact that 3 procedures were possible for us in one hospitalization for instance. We always get solid preparation and explanation ahead of time, which gives us a lot of trust. Doctors welcome all questions and respond very well so that you feel very involved as parents. And during hospitalization they are always alert and take effective action. A top-class hospital!