After waiting for 4 months, Vera finally had an MRI scan done recently of her back, spine and head. Towards the summer of 2015, Vera had been making progress with walking with her walker and had started potty training. 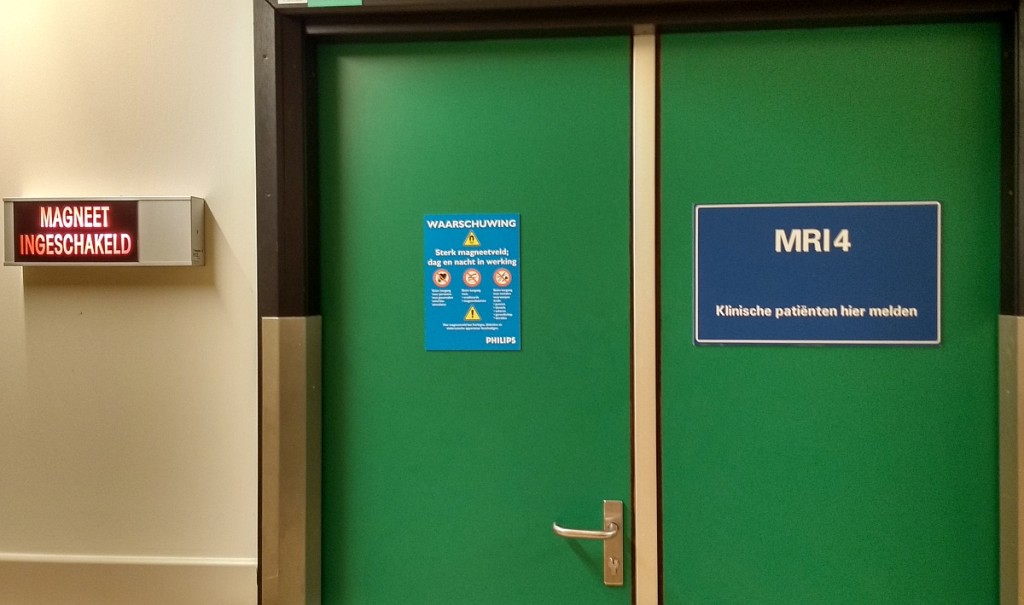 But it turned out summer was her best moment. In August she started regressing again. She made it clear she was in pain more often (during the day, but also at night, despite sleep medication she would wake suddenly and cry loudly), she didn’t want to sit on the potty any more and was walking less and less. She went from walking from the garden gate to the square near our house to a few steps in the living room and sitting or laying down again, simply because she couldn’t do it. She often pointed to her leg or knee hurting and made the gesture for doctor. This was not only noticeable at home but at her therapeutic preschool as well.

So in September we prompted a call to action and requested an MRI after consultation. In the first place because we thought she might have tethered cord, where the spinal cord is abnormally attached to the base of the spine and the spinal cord can’t move freely. A common problem often associated with Costello syndrome. Most of her symptoms would fit this diagnosis. They looked at her head as well during the MRI because chiari is another known issue often associated with Costello syndrome.
To make the story complete: the scan for tethered cord was needed regardless, because the positioning of her feet was getting more and more off and her Achilles tendons appear to be too short. This can be solved by stretching, putting her feet in casts and stretching little by little. But this can only be done when tethered cord is ruled out, otherwise it will only make things worse. This option is still a possibility in the coming year to correct the positioning of her feet and to hopefully improve her walking.
In short: the MRI was part of a careful consideration in the correct order of tests based on her complaints.

But the results of the MRI, two weeks ago, were unexpected. There was no tethered cord. But the MRI did show a cavity in the medulla oblongata (located in the hindbrain) and a mild chiari malformation.

A chiari malformation is, in short, the downward displacement of the bottom part of the brain through the opening at the base of the skull. In Vera’s case it’s the cerebellar tonsils and it’s mild (there are lots of people who have this but the condition can remain unknown because there are no symptoms). But, combined with the cavity (possibly a cyst) present in the medulla oblongata, this could very well be the cause of Vera’s symptoms. Because we don’t have an earlier MRI, there is no point of reference or comparison, which makes it impossible to pinpoint when this may have started to develop. The cavity in the medulla oblongata (syringomyelia) in particular can cause a lot of symptoms in vital functions such as waking/sleeping and loss of strength in the limbs. Problems with swallowing, pressure in the ears, headaches, painful bowel movements (due to pressure in the spine) and vision problems are also mentioned. These are all symptoms that Vera has, so there could be a correlation. We were quickly invited for a consultation with the paediatric neurosurgeon.

During a good conversation we quickly agreed to operate. Part of the cerebellar tonsils have slipped through the opening at the base of the skull into the spinal cavity. There is not enough space in the skull itself for the cerebellum and therefore more space has to be created in the skull bone. To speak with the words of the surgeon: the operation will be ‘bone only‘. Fortunately, the membranes and the brain itself will be left alone so there will be less risk.Nonetheless, we are about to embark on a very scary operation, possibly even before April.

I may be able to write this down in a technical and calm manner, but for us as parents (and big sister Mieke of course) these are scary and trying times. Making sure you are ‘reading’ your child correctly, having critical conversations as parents about what we are seeing and whether or not we should take action, the blurred overall picture because so many other medical issues are going on with Vera and could be causing similar symptoms, the difficulty in communicating with her to find out what is and what isn’t bothering her, the many phone calls and car trips to the hospital, conversations with doctors and the medical tests all drain our energy. Not to mention the emotional toll it has on a parent to watch your child cry many times a day because she is hurting somewhere inside her body. The past couple of months we have walked around with her and held her very often. Not counting a couple of hours of continuous sleep at night, we basically have had to comfort her hourly, holding her with her head on our shoulders or in our lap to get her comfortable again. Every day.
So oddly, we feel a sense of relief that, after the process of worrying, taking action, testing (while doubting all the while whether all this invasiveness is really necessary) and waiting for the results, we finally have a conversation with a possible course of action to solve the problem. ‘Cause in the end, that is what we want: to improve Vera’s quality of life. And in doing so, lighten the burden in daily life for us as parents as well.

And, as is always the case with Vera, between all the bad moments, we keep being amazed at her infectious smile and endless enthusiasm to make the best of things and to do what she can do.