Vera received the diagnosis: Costello Syndrome within 3 weeks of birth. That’s extremely fast. A tough message for parents who are still recovering from an emergency C-section/having a new baby/the baby is a heart patient/weeks at the intensive care unit/baby won’t eat/what about caring for our other daughter? News that’s hard to digest. I remember flashes from the “bad news consultation”. 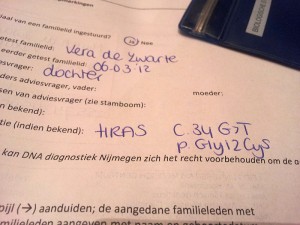 “…she has been tested for an anomaly in the HRAS-gene and it turns out she has this condition. Which is bad news.”
“…this will mark your lives.”
“…mental disability…”
“…fortunately, people with this syndrome have a very friendly personality.”
“…this is a rare syndrome. You will educate yourselves and within a few months you will know more than your doctor.”

Fast forward two years. We are very thankful for the very fast diagnosis. It gave us clarity from the beginning. It helped us make decisions, like asking for a PEG-tube instead of a feeding tube through her nose (because she wouldn’t be eating on her own for a while according to other parents and because it was so uncomfortable for Vera) and it gave us contact with others who were experiencing the same thing: an extensive international group of parents to exchange experiences and compare medical information with. Because the syndrome is certainly medical. Over the past two years we have taken the crash course: ‘Costello Syndrome in Real Life’. We know a lot about the syndrome thanks to the doctors, nurses, therapists and several articles. But we learned the most from other parents. Because they know from real life experience how much mucus a little body can produce and spit up. They know what it feels like when the small body of a child responds to different types of sensory input. At night they wake up constantly from a restless baby. They know which creams prevent skin irritation or help with premature wrinkles in young little hands. Which feeding pumps, syringes and types of gauze are best. And not in the least: which forms of treatment and what medication works for children with Costello Syndrome. They have to in order to create quality of life for their child, for themselves and for their other children. And now we are a part of this group of parents as well.
Last Thursday was a classic Costello-moment. Vera had to go to the Children’s hospital in Utrecht for an IV-drip with bisphosphonates to help strengthen her brittle bones. But starting an IV-line in a person with Costello is like throwing darts while blindfolded. The skinfolds are deep, the skin is sweaty, the veins run differently, are invisible when the child is stressed and disappear when the needle first enters. And Vera has had enough people poking and prodding her, so at the first sight of a white coat she was hiding away close to mom and dad and started a heartbreaking cry. 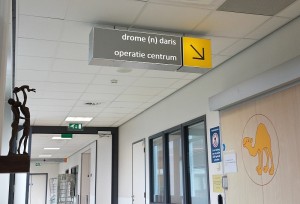 Luckily we had a nurse who knew Vera and didn’t even attempt to put a line in, but called the anesthesiologist instead. Who then didn’t succeed either. There was only one other option left: putting the IV-line in under sedation in the operating room. But in order to do that, she needs to have an empty stomach. So we had to wait 2 hours. The OR is now a familiar place for us and one of us carries her onto the table and stays with her until she falls asleep. And minutes later, there you are again as parents waiting in the hallways. “Putting an IV-line in doesn’t have to take this long, does it?” “Why has it been 45 minutes?”

Finally we were allowed to see her again. IV-lines in both arms (you never know if one might fail), she was wrapped up warmly but not feeling well from the sedative. But we could finally get started!

Thankfully Vera did not experience any major side effects from the infusion itself (just a minor temperature and a bit listless) even though the doctors had told us to be prepared for side effects.
And when we were finally back home again and were sitting on the couch at 9:30 PM, Vera, with her hands wrapped in bandages like little boxing gloves was sitting there, smiling the biggest smile. Because a Costello has a friendly personality. And she marks our lives. We already learned that in lesson 1.