Hello, this is Vera. 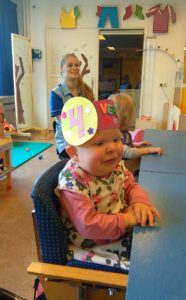 This time I would like to do the talking. Since I am already four years old, I felt it was high time. Yes, you read that correctly, I am now FOUR years old! Mom and dad have been fussing over this operation and that’s why they haven’t written about my birthday. They talk about doctors way too much anyways, I can talk about so many more things besides those people in their white coats. But all right, just so I won’t ignore mom and dad completely, I can tell you that the operation worked out really well. On the day after my birthday I had to wake up ridiculously early to go to the hospital, but I was completely ready to go. Just when I was about to put on my flattering operation gown, mom and dad made sour faces because a nervous man was telling them that the surgeon was ill.
Well, I can understand things like that, better next time. And that next time was exactly one week later. Okay, it was no picnic. I laid on the operating table for 3.5 hours and afterwards I felt like someone had been seriously messing with my skull and brain. Turns out the doctor said that he indeed had done just that (no way!) and that everything had gone according to plan. This time I didn’t need a tube in my throat after the operation, I could breathe just fine on my own, thank you very much. And therefore I didn’t need to go to intensive care, which made mom and dad very happy. But I must say, they were very busy with me. I was in pain, didn’t feel very good and felt nauseated. I made sure to let everybody know. I was given morphine through an IV and some other medication which made me feel kind of funny. But I quickly realized that laying still and sleeping a lot would be best. After that, I did my very best to recover and that worked out pretty well. I am a fighter! And so, on the third day after the operation, against all expectations, I was allowed to go home! I wasn’t very talkative yet, but in the hospital they were doing everything my mom and dad could do at home as well (that’s the cool thing about my parents) and at home I could lay against my sister on the couch. Much better.

Since then I have been getting lots and lots of compliments. Sometimes I think I should have had this operation sooner. Because you know, before the operation I didn’t really like to move my body as much. Laying or sitting down felt much better. Standing and walking wasn’t really my thing anymore. But now everybody keeps telling me what a good job I am doing walking with my walker, along the table and climbing some steps on the stairs. I tricked my mom recently. She had put me on the couch and went to the kitchen to cook. I climbed off the couch by myself, grabbed a little chair and used it to walk over to the kitchen. You should have seen my mom’s face when I showed up right next to her, ha ha! In short, the doctor wants me to visit to have a chat and check on me, but I can already tell you: the operation was a success.

Mom and dad still frown when they see the positioning of my feet, I don’t seem to be standing particularly straight or stable. But, hey, one thing at a time. They’re probably going to drag me to the doctor for that as well. They are already talking about an image of my lower back and something about Achilles tendons that are too short and casts for my feet. We’ll see what happens, for now just let me do what I can. I am not crying as loudly at night and my legs hurt less than before, it feels much better now.

But, like I said, I have much more to tell you: That I left the Sophia rehabilitation preschool for instance. I have had a wonderful time there with the sweetest teachers I could imagine. But I think I outgrew the place and I wanted to broaden my horizon. When you do something, you gotta do it right, so instead of a preschool I chose a school in Rotterdam (my dad is pretty happy about the Rotterdam choice, because he works there and feels very at home in that city). The school is called mythylschool De Brug (school for children with special needs The Bridge) I am in Ms. Corrie and Ms. Mieke’s class, which is quite funny because I also have an aunt named Corrie and a sister named Mieke! But to be clear: they don’t look anything alike. There are 7 other children in my class, we’re all buddies because some of them are in wheelchairs, are taking their time to learn to speak or need time to learn something. I feel right at home. And I act like I’ve been going there for months. That’s what the teachers also say about me. In reality I have slowly been adjusting to school after the operation and for now, I go 4 mornings per week and we’ll probably keep it this way for a while. Those four mornings are pretty intense! My energy levels are not top level and sometimes even I forget that my heart acts out throughout the day, sometimes it beats super fast and then it beats normally again. At my new school, we do really fun activities: we sit in circle time, hang up pictures of the things we will do that day, we go to the play room, read books, we go swimming (yes, for real: a swimming pool at school!) and we enjoy listening to music. I have a slight suspicion that I’ll have to do several types of therapy work soon, but for now I think this is already quite enough.

And there is something else I want to tell you: Mom took me to school the first couple of times, but now Janna takes me there. Janna is a cheerful early bird with a huge white van, which she parks in the middle of the street, no problem. I go and sit in my stroller like a queen, then get into the van with a lift and wave goodbye to mom and dad: Bye!! Inside the bus it’s really fun, because lots of other friends from school ride along also. I must say that I am starting to get a bit jealous when I see kids on the bus and at school in wheelchairs. I mean, I am FOUR years old and they still put me in a stroller, that’s why some people still call me a baby. Come on! I think it’s about time I switched out my ride, so my new occupational therapist and I are looking to see whether we can find a mini wheelchair for me. Mom does still pick me up every day, when I go home at lunch time. I’m so happy I get to travel home with my mom. I really like to talk about my day and about who is going to be where and who will be with me. It makes me feel better when I know what to expect.

Well, by now you’ll understand that we’ve had some busy weeks in which a lot has happened. At night, I like to process everything. Unfortunately, this makes mom and dad look a bit tired during the day. I get to see them about five times a night when they comfort me or take me in their laps. Oh well, it will all work out. In the mean time I’ve decided to celebrate all of this by eating ice cream and chips again and by practicing my swallowing skills. And that is so much fun, especially with my big sister Mieke. I say: Bring on the warm spring days! I scream, you scream, we all scream for ice cream!
Lots of love and talk to you later, Vera. 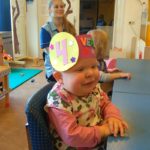 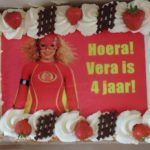 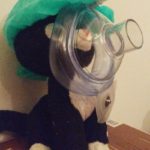 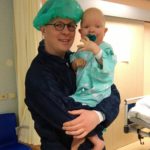 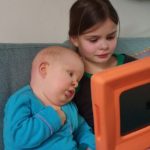 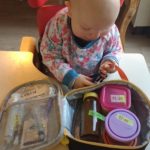 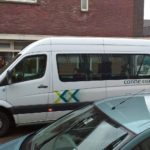 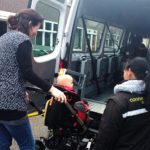 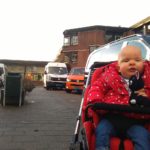 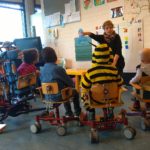 Vera in haar klas in Rotterdam 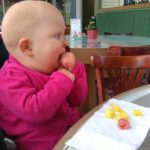 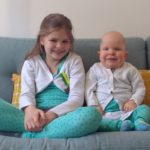